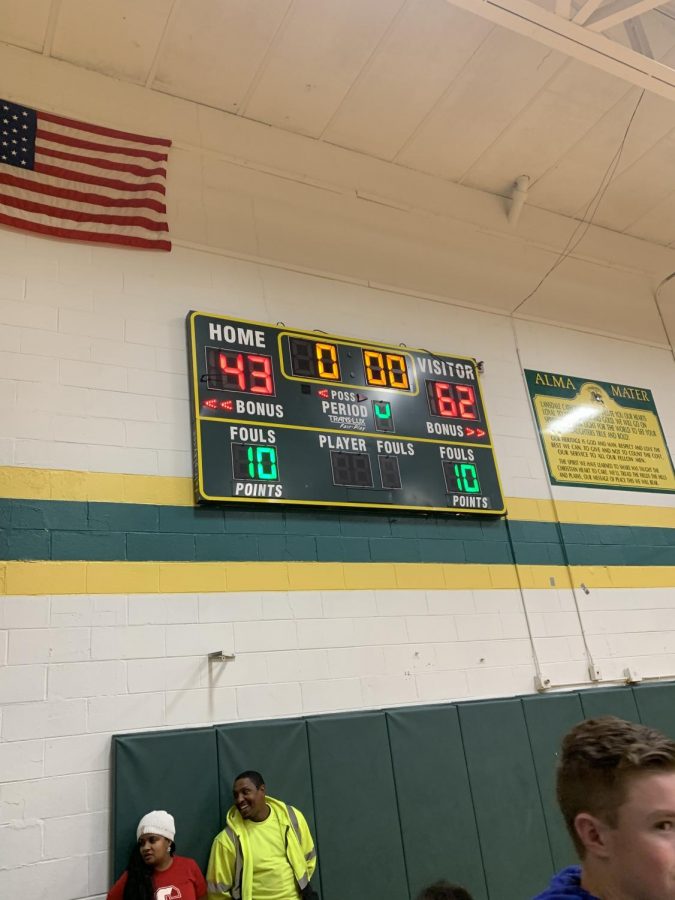 The scoreboard reflects the final score of the Carroll vs. LC varsity boys basketball game Friday

Friday was a big day for the Patriots as they looked to advance to 3-0 in Philadelphia Catholic League play.

Archbishop Carroll’s boys varsity basketball team faced Lansdale Catholic, which dropped its first two games in league play to PCL powerhouses Roman Catholic and Neumann -Goretti. This was a big game for Carroll, as they would be without big man and Bryant commit Tairi Ketner because of an injury.

Before the away game, students expressed confidence in the team.

“Carroll will win by a lot,” said senior Erin Sweeney.

“The boys have had a great season so far. I think we are one of the best teams in the Catholic League, and we won’t have any problems with Lansdale,” said by senior Tommy Anderson, student council president.

During the game, the Patriots were off to a great start. At the half, Carroll was out to a 16 point lead with a score of 34-18.

In the second half LC’s Crusaders continued to fight and cut the Patriot lead to 12 at the end of the third.

“In the third we played bad, then we pulled it together in the fourth,” said varsity player Caleb Carter, a junior.

Junior Anquan Hill, who has a D1 offer to Saint Joseph’s University, had 8 points before fouling out in the fourth quarter.

The road ahead is about to get harder for the Patriots. After defeating Devon Prep at home Sunday, they will travel to Father Judge on Friday. On Saturday, the team travels to Atlantic City to play Montverde, considered one of the best teams in the country.

Next Monday, the boys return home to play against Neumann-Goretti, which could be a preview of a possible match-up at the Palestra in February.

We will need the Red Sea to come out to support the boys. Let’s hope the Patriots will continue their stellar play.